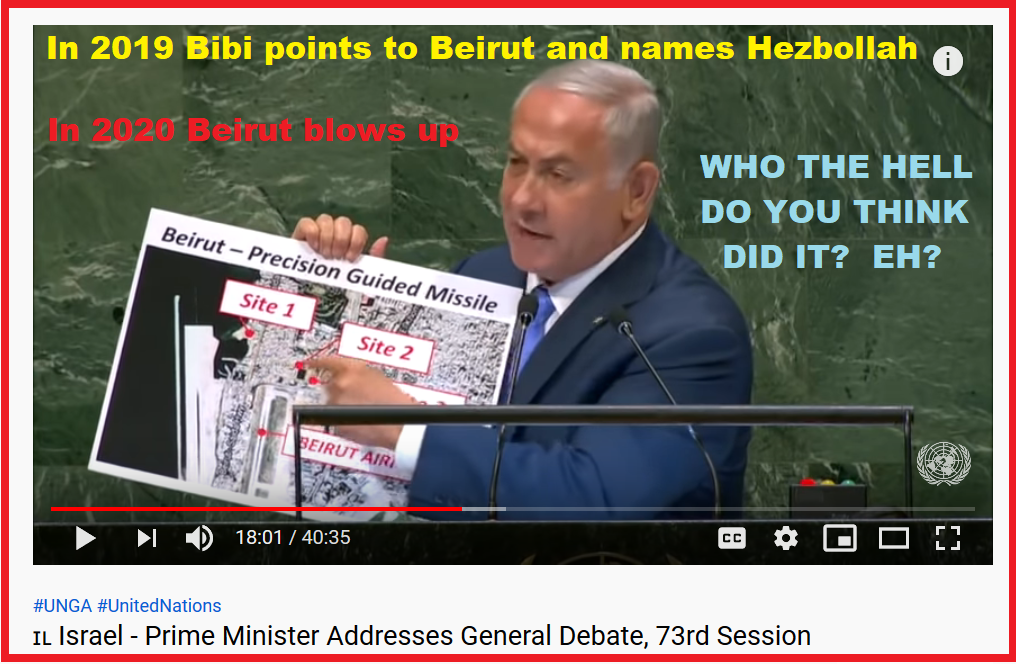 People need to wake up, they are seriously underestimating Bibi Netanyahu and his Zionist gaggle of terrorists. They do have the will to use nuclear weapons. They did 911, proven by Christopher Bollyn.  Bibi is also the author of the War of Terror – a sophisticated psyop that got the United States to bomb his enemies.  Make no mistake who the King of Terror is, Benjamin Netanyahu.

Study this video – Netanyahu is telling you what he is going to do next, pay attention to Israel threats starts @5:20.

So if Israel did 911 and got away scott free, still fooling many on this site (LOL) then don’t you think this fertilizer ruse is also a sophisticated psyop? I am telling you Israel just nuked Beirut and got away with it because the Jews control the media and are experts at running psyops to take heat off the real perps – which is them and their Khazarian crime spree. Jews did 911 and successfully convinced the world that Muslims did it. And no matter the mountain of evidence that counters the official story, the world is full of idiots that still believe the false narrative.

If you don’t think most people are totally retarded then just go outside and look at all the mask wearing sheeple – many who have them on in their car with the windows rolled up! Covid is a hoax just like the Holocaust – and look at all the idiots that still buy the 6 million ruse. The fact is people are easy to fool so long as the authority tells them what to believe, they simply will not challenge the power, they lack the will and the intellect to do so.

So why don’t you all consider the real game here, a multiyear setup of a sophisticated psychological operations by the experts in deception. You have to admit they are damn good at what they do, they even have trolls on all the message boards casting fear and doubt to any alternative narrative that exposes Israel as the doer of the deed.

Bibi holds up a poster board of Beirut – he talks of Hizbollah having bases and operations – that is the setup. Then later Beirut goes up in smoke. Cohencidence or coincidence? If you can’t see this ploy then God help you. He is telling you straight up that Israel is targeting Hizbollah in Beirut, but part of the ruse is to point to fake targets that they have no plan on striking. They are not going to give the actual target list away are they? If he pointed to an actual target and then it was taken out then that would give them away, wouldn’t it. So the ploy is to point to fake targets and maintain plausible deniability.

Mark Glenn of the ugly truth website had it figured out over a decade ago, when Bibi holds up a bomb cartoon at the United Nations, he is telling you he has a bomb and it is about to go off, but he doesn’t say he is going to do it, he says Iran is going to do it. But really it is going to be a Mossad bomb going off and Iran getting the blame. Can you see that? It is pure evil genius. You got to hand it to him, Bibi is damn good at what he does.

Bibi telling you he’s about 90% ready to set off a bomb:

Likewise Bibi predicted the world trade center attack. So the most evil man on the planet has a gift of prophecy? Not a chance, he is planning on taking out the WTC and he is using predictive programming in his speech (plus all the Hollywood movies like Back to the Future) which put into you mind decades ahead of time Muslim towelheads doing the terror. But it is really Jews doing the terror and framing the Muslims with visual scenes stuck in the movies so that at a subconscious level you think it is Muslims.

Now those who figure all this out – the Jew media goes into overdrive labeling it as a crazy conspiracy theory when in fact there was nothing crazy about predictive programming, it is a military psyop being waged on your mind, but of course that is crazy to think Jews are waging a war on our minds, 6 million Jews did get stuffed into those ovens by those evil Nazis and if you don’t agree then you are a dirty antisemite – even though the Jews in Poland were NOT semites. 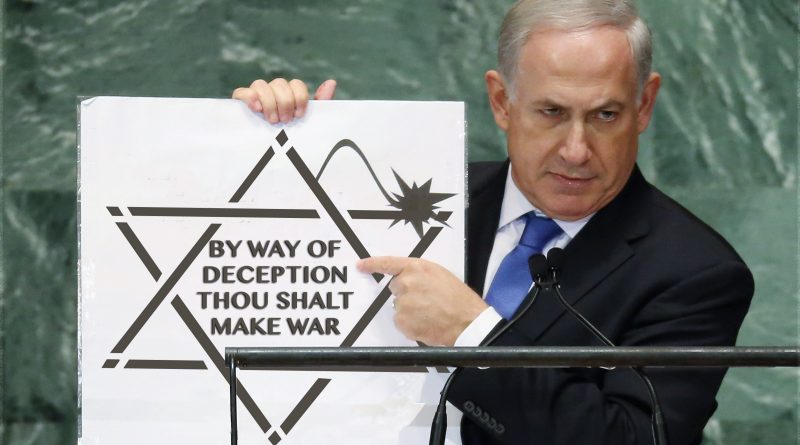 It is a well known fact that Israel did 911 in 2001, and the brainchild of the War of Terror was Benjamin Netanyahu. I direct you to Christopher Bollyn’s numerous articles on this.

Now look at this video of Netanyahu interview in 1995. What does he say?

“I wrote a book in 1995, and I said that if the West doesn’t wake up to the suicidal nature of militant Islam, the next thing you will see is militant Islam bringing down the World Trade Center.”

Israel is not about to broadcast it’s actual targets as the other side would take action and move it’s assets out of the target zone. Bibi is playing a psychological game with the world. He is telling you he is going to attack Hizbollah in Beirut, but he is staying within the boundaries of plausible deniability. When Beirut harbor blew up you should immediately suspect him because he is the one state actor making speeches to the world about his enemy Hizbollah in Beirut. 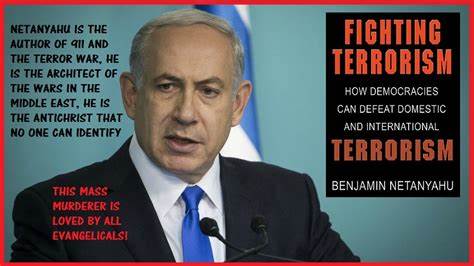 If your neighbor went to your city council meeting and complained about a particular neighbor dog barking all of the time, then the barking dogs in the neighborhood start dying, who would you suspect? The person filing the complaint against the barking dog. But Bibi escapes such accusations because the media (Jewish owned and operated) gives him a free pass, they say Hizbollah did it. That is like saying the neighbors with the bad dogs killed their own dogs.

Israel excels in this technique of blaming the victim for what they do. They do not want the world to turn against them, or wake up that the Zionist thugs are the ones responsible for nearly all the terrorism in the world. So what they do is manage public perception of Israel. Israel, they say, is the world’s most moral army. Israel is the apple of god’s eye. They even have this huge evangelical lobby praising Israel in megachurches while Israel does all the terror

Israel got away with 911 scott free, not one Jew was even charged with the crime. On 911 Jews were caught celebrating, driving around in vans with a mural of planes crashing into the WTC! No one thought to investigate the Jewish lobby for their hand in this, when Jews in Hollywood put scenes of the trade towers on fire in movies?

The evil genius at work here, everyone is arguing about the fertilizer not Israel. This is exactly like 911, how did the towers collapse not who was the instigator of the crime. Make no mistake, Bibi is the prime suspect here. Now look at what is going on in Iran, a sabotage war. It was Bibi who also held up a poster of Iran targets. People went to those places, they were empty. Obviously the target announced to the world was not the real target, Iran is. So when all these accidental explosions and fires go off in Iran, who do you suspect? Iran is being attacked by Israel on the orders of Netanyahu. 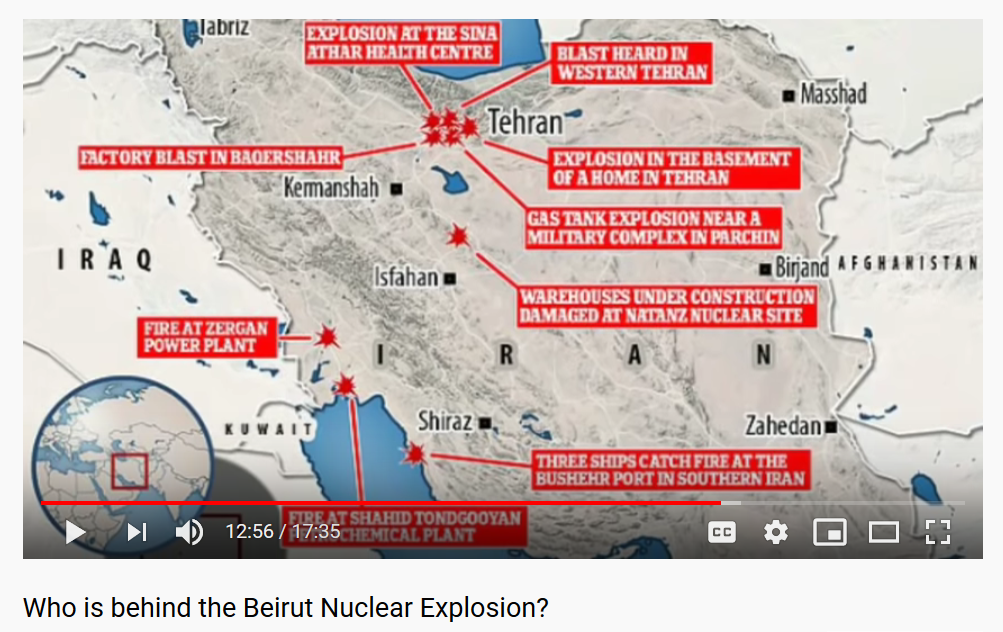 “If we get caught they will just replace us with persons of the same cloth. So it does not matter what you do, America is a golden calf and we will suck it dry, chop it up, and sell it off piece by piece until there is nothing left but the world’s biggest welfare state that we will create and control. Why? Because it is the will of God and America is big enough to take the hit so we can do it again and again and again. This is what we do to countries that we hate. We destroy them very slowly and make them suffer for refusing to be our slaves.”

Also, the protests and color revolution in Lebanon – all part of the plan, long planned out before the attack. Israel is rolling over the Middle East like a D-9 cat, crushing all Arab resistance, fracturing and destabilizing all nations in it’s reach. Every nation near Israel is now smoking rubble. Cohencidence people? So when Beirut blew up, who the hell do you think did it? You think Israel got lucky, again? C’mon people, wake the fuck up! 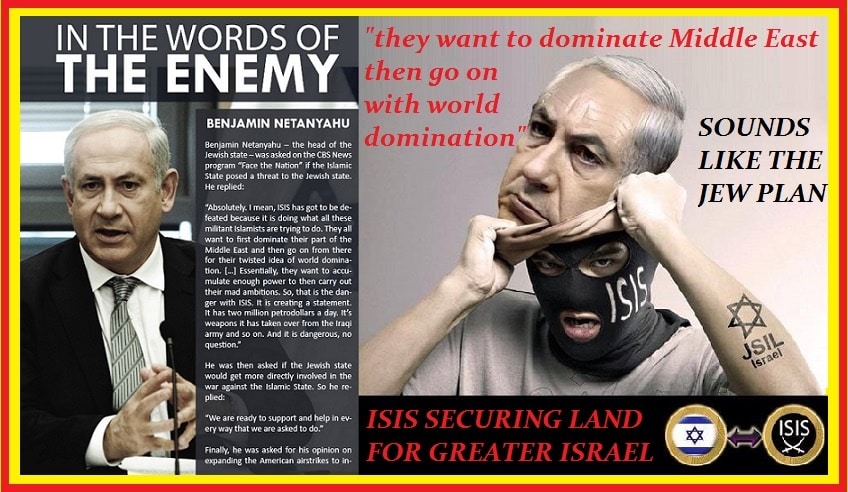 2 thoughts on “The Prime Suspect Does it Again”

What Really Threatens Your Soul

Carbon Footprints on the Road to Hell

Recent Posts: The End of Amerika

Christianity is a Jew Coup

Skyscrapers Pre-Wired to Come Down

Recent Posts: The Problem with God

Apocalypse Now! You’ve Been Left Below with Jews

Heaven is No Better than Earth

Amerika the Great Whore of Israel

Josephus Invented Jesus in HIS Image